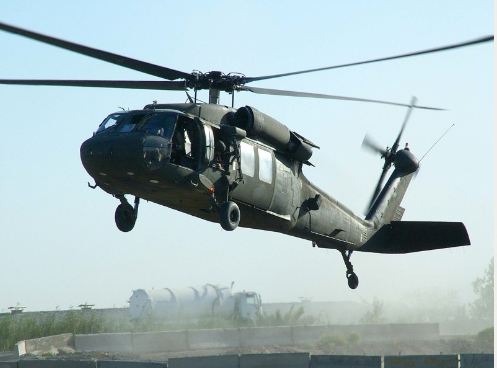 The UH-60L BLACK HAWK is the world's most advanced twin-turbine military helicopter. It is powered by twin General Electric T700-GE-701C turboshaft engines rated at 1,890 shp each, plus the 3,400 shp Improved Durability Gearbox, and heavy-duty flight controls developed for the naval S-70B SEAHAWK. The UH-60L is cleared to 22,000 lb gross weight for internal loads, and can carry 9,000 lb external loads.

The UH-60 was made to fly soldiers into combat. BLACK HAWK has built-in tolerance to small arms fire and most medium-caliber high-explosive projectiles. Plus specifically designed airframe and landing gear features, for a high degree of battlefield survivability. Not to mention ballistically hardened flight controls. Redundant electrical and hydraulic systems. A self-sealing, crash-resistant fuel system. And energy-absorbing landing gear and crew seats.

That's why, wherever they fly, BLACK HAWKs share a common heritage. Of power. Survivability. Crashworthiness. And victory.

We recommend to see
Helicopters
Send inquiry
Buy
Contact supplier
Your question has been sent successfully
Consultants of the shop typically answer questions during the day.